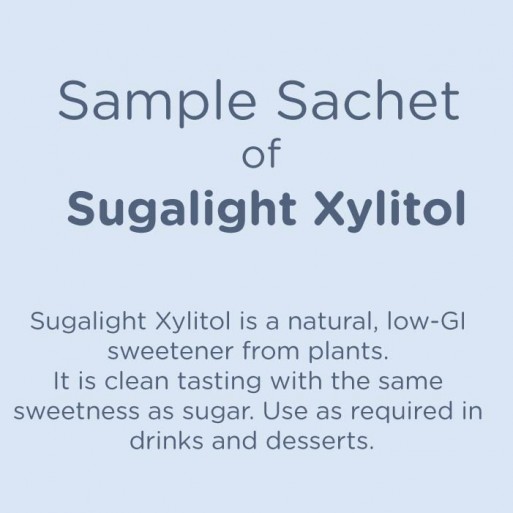 Xylitol powder is a natural sweetener derived from corn. It has a low glycemic index of 7. This item contains 1x 5g sample sachet of Xylitol.

Our Sugalight Xylitol Powder FAQ can be accessed here.

Xylitol is a naturally occurring sweetener that is found in the fibers of various fruits and vegetables including berries, oats and mushrooms. It is so natural in fact that the our bodies produce about 15 grams of Xylitol daily during its normal metabolic processes.

While artificial sweeteners such as saccharin, aspartame (Equal) and sucralose (Splenda) are available, they would not be ideal choices for anyone looking for an all natural, 'no sugar added' sweetener.

Since the lack of blood sugar spikes means that an insulin response is not required, Xylitol is great news for diabetics. Diabetes being a medical condition in which the body no longer produces insulin (Type I Diabetes) or fails to respond to insulin (Type 2 Diabetes).

The Glycemic Index (GI) is a way to measure the size of blood sugar spikes caused by various foods. While glucose is GI 100 and table sugar is GI 60, Xylitol is unique is having an ultra low GI of 7.

Xylitol has no known toxicity in humans. In one study, the participants consumed a diet containing a monthly average of 1.5 kg of Xylitol with a maximum daily intake of 430 g with no apparent ill effects.

I am diabetic and I make use of Maltitol as a natural sweetener. Is Maltitol just as beneficial as Xylitol?

Both Maltitol and Xylitol fall into the category of sweeteners known as polyols - both are tasteless, sugar-like substances which can be used to sweeten foods.

While Xylitol is diabetic-friendly due to its low GI of 7, Maltitol has the ability to cause blood sugar spikes in diabetics with its significantly higher GI.

Bear in mind that at GI 50, Maltitol syrup is only slightly lower than table sugar (GI 60). Several diabetes websites do warn of the dangers of excessive Maltitol consumption.

If you are diabetic and you are watching what you eat, do not assume that every packet of 'no sugar added' cookies or chocolate is automatically good for you. READ THE FINE PRINT!  Caveat emptor as always.

There may be little reason to switch to Xylitol if you are completely happy with Stevia.

We do find however, that Stevia is an acquired taste. To certain individuals, the aftertaste in Stevia leaves a lot to be desired as it appears similar to saccharin, the most popular artificial sweeteners back in the 1970s and 80s.

While Xylitol tastes great in desserts and is certainly heat stable, it will not cause breads to rise. This is because yeast requires sugar to work and it will not metabolize Xylitol to produce carbon dioxide bubbles.

The following are external links where you can obtain more information about Xylitol.