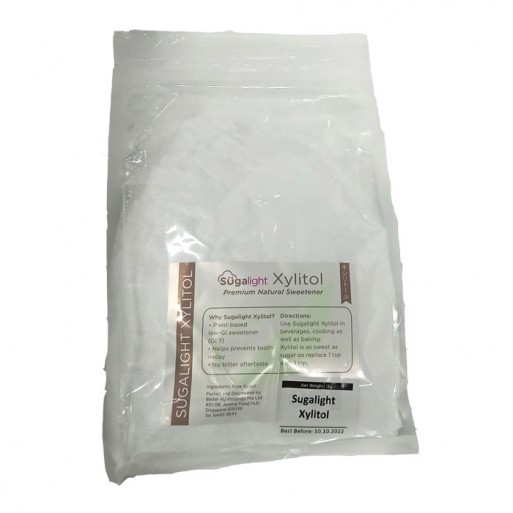 1000g packed in a resealable pack.

Xylitol (木糖醇) is a natural sweetener derived from corn. It has a low glycemic index of 7.

Xylitol is a naturally occurring sweetener that is found in the fibers of various fruits and vegetables including berries, oats and mushrooms. In fact, our bodies produce about 15 grams of Xylitol daily during its normal metabolic processes.

While artificial sweeteners such as saccharin, aspartame (Equal) and sucralose (Splenda) are available, they would not be ideal choices for anyone looking for an all natural, 'non-sugared' sweetener.

Since the lack of blood sugar spikes means that an insulin response is not required, Xylitol is great news for type-2 diabetics - a medical condition in which the body fails to respond to insulin (Type 2 Diabetes).

The Glycemic Index (GI) is a way to measure the size of blood sugar spikes caused by various foods. While glucose is GI 100 and table sugar is GI 60, Xylitol is unique is having a very low GI of 7.

It's great if you are completely happy with Stevia!

However, we do find Stevia to be an acquired taste. The bitter aftertaste in Stevia can taste like saccharin, the popular artificial sweetener back in the 1970s and 80s.

While Xylitol withstands heat and tastes great, it will not cause breads to rise. For breads to rise, yeast requires sugar to produce carbon dioxide bubbles.